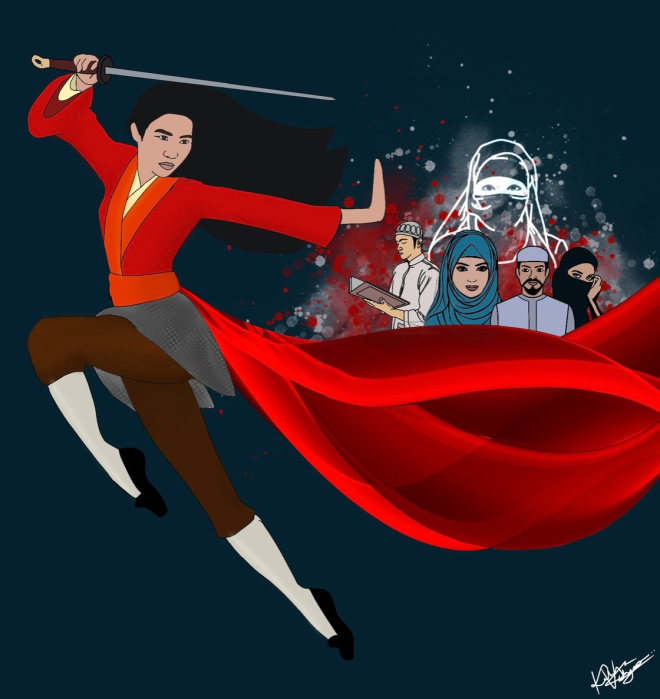 Disney’s Live-Action Mulan has been a step towards racial representation in mainstream media, featuring an all Asian and authentic cast. However, from the beginning of the film’s five-year creation process, the movie has engendered a deluge of controversies. First, the casting process spurred rumours of a Caucasian lead as Mulan, sparking an understandable backlash. After these rumours were discovered untrue, the real lead voiced positive opinions on the Hong Kong police’s aggressive method of handling of protests. This once more led to an intense public response. But, the most severe and alarming discussion occurred right after the release of the movie when people noticed Disney thanking eight government organizations within Xinjiang in the credits.

The reason activists and the general public could hear alarm bells when this was brought to light is a result of the extreme human rights abuses occurring in the province. For years now, China’s Uighur Muslims have been held in internment camps. In addition to deaths inside the camps, the Uighur birthrate has sharply declined because of operations to prevent births. Despite China’s claims of these camps serving as training and re-education facilities, with the information known, this is considered as genocide.

As a company, Disney has made a substantial effort to please China with the release of Mulan, editing the movie after feedback from Chinese officials and aiming to create a story appealing to the hearts of the average Chinese household. In 1997, relations between the two became strained as the government didn’t appreciate a Disney movie, Kundun, praising Dalai Lama. After this event, the release of the animated version of Mulan was hardly successful in the country. Disney has now taken the approach of keeping China as an ally, especially after they opened a Disneyland in Shanghai.

The point where a concern arises is when Disney chooses Xinjiang as a location for the film after there is widespread awareness of the human right infringements. It is also important to consider that there are a plethora of other beautiful locations that would not compromise on the genuineness of the setting. While the company is monetarily profiting from Mulan’s release, this choice undermines the seriousness and magnitude of the malfeasance, subsequently disregarding the genocide against the Uighur Muslims.