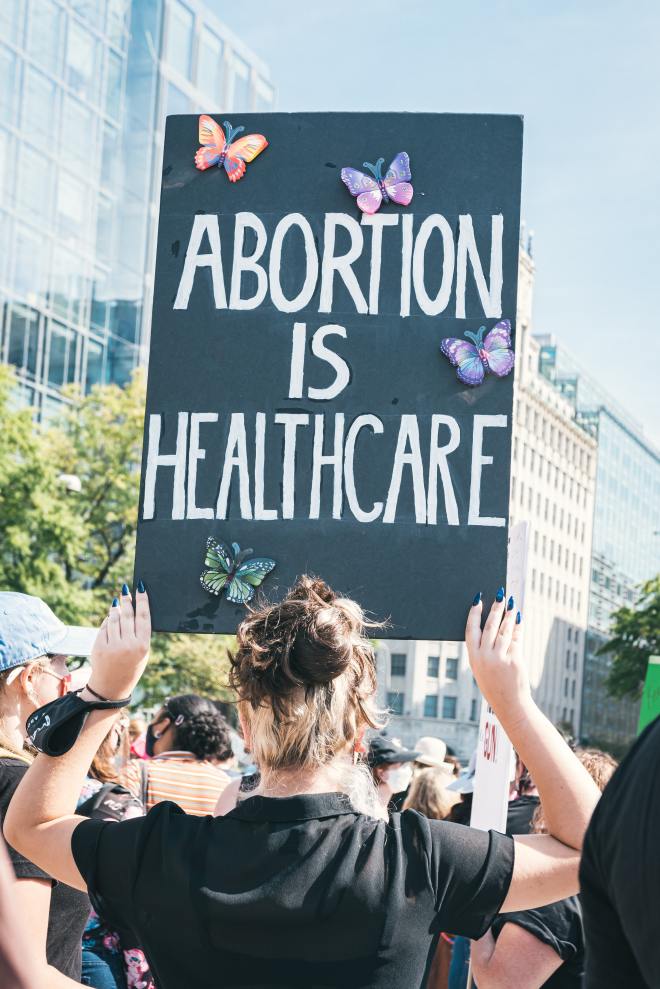 The Unfaltering Fight for Equality: Abortion Rights in the Past and Future

“Abortion is Healthcare” by Gayatri Malhotra on Unsplash

“We have to stand together in this fight, right — those of us who understand what’s at stake,” said U.S. Vice President Kamala Harris. On June 24, 2022, the Supreme Court overturned Roe v. Wade, the culmination of unwavering attempts of activists to legalize abortion rights in the United States.

“History doesn’t repeat itself, but it often rhymes,” is a phrase that many have undoubtedly heard of before, and it does hold true in many instances. But what if history just repeated itself again–and completely rewinded to almost half a century ago?

The second wave of feminism in American history began in the 1960s, rejecting several of the principles and values that had been passed down from previous generations. Equal socioeconomic opportunities for women, legal protection from abuse, and the right to a safe abortion were key issues in the struggle for equal opportunity for women. Feminists during that period of time formed organizations such as the National Organization for Women, standing up against the repressive gender norms that had been previously assigned to them. Constricting ideals that had been embedded within society, such as the Cult of Domesticity, had been established for centuries. Therefore, when feminists successfully pushed for the passage of the Supreme Court decision on Roe v. Wade, supporting a woman’s right to privacy, and thus protecting her right to a legal abortion, the world viewed this 1973 ruling as a major milestone in history.

Almost fifty years later, however, despite public sentiment, the Supreme Court overturned this ruling this past June, setting back decades of breakthroughs and progress on equality. Much of the general public seems to agree that this new decision only serves to limit women’s access to safe abortions––a pregnant woman will still follow through with the abortion in a highly risky manner, jeopardizing the life of the mother. However, even with public criticism towards the Supreme Court decision, GOP Senator Lindsey Graham proposed a national ban on abortions in September. This new bill was met with fierce public outcry, with the U.S. President Joe Biden stepping forward to send the message that he will, in fact, veto the bill if it ever passes.

With the November midterms approaching, it is certain that abortion rights will play a key role. In California, following the overturning of Roe v. Wade, Proposition 1 was brought to light; a majority vote would distinctly allow access to safe abortions to be legal statewide. In this day and age, it is utterly shocking that such backwards progress has been made and such oppressive rulings have passed. It is more crucial than ever to fight for personal autonomy, freedom of choice, and access to privacy and safe resources.

My body, my choice.